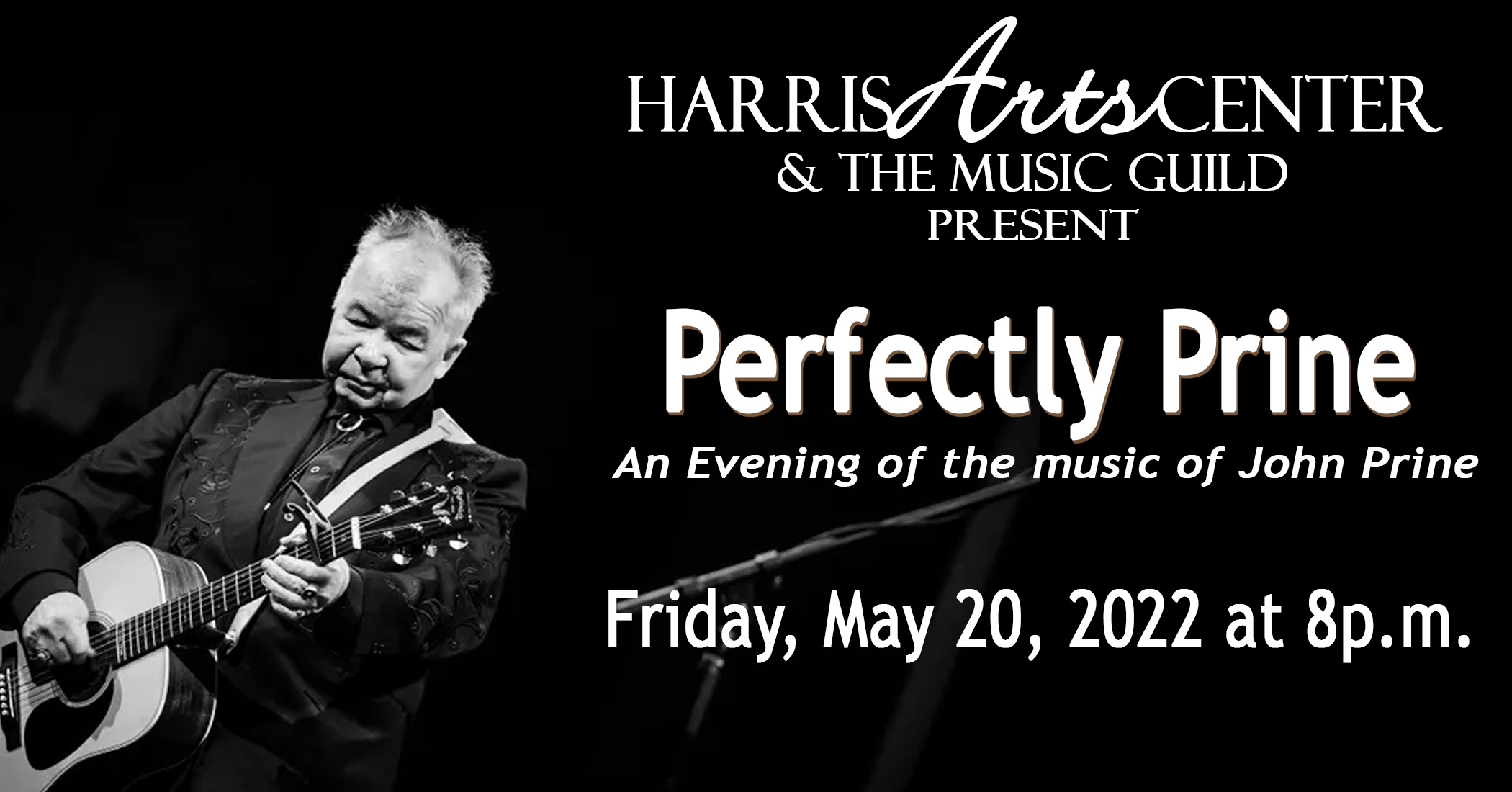 JOHN PRINE, THE MAN AND HIS MUSIC, TO BE CELEBRATED AT THE HARRIS ARTS CENTER

The Harris Arts Center will present “Perfectly Prine”, a concert honoring the life and legacy of American songwriting legend John Prine, on Friday, May 20, at 8 p.m.

John Prine was “discovered” in Chicago by film critic Roger Ebert, who announced his find with his Chicago Sun-Times headline “Singing Mailman Who Delivers A Powerful Message In a Few Words”.  Prine – a native of Maywood, Illinois – soon left his job as a letter carrier and embarked upon one of the most independent, iconic, and enigmatic careers in modern American music.  Over a span of six decades, his gifts of observation, insight, and storytelling marked Prine out as one of few artists who captured the joys, sorrows, beauty, and grit of the human experience, from the sublime to the ridiculous…and in words that we could all understand.  His songs – like “Sam Stone”, “Illegal Smile”, “Angel from Montgomery”, “Paradise”, “Hello in There”, and “Donald and Lydia” – were, according to Nobel laureate Bob Dylan, “Proustian existentialism” and “Midwestern mindtrips to the nth degree.”  Rhodes scholar and helicopter pilot Kris Kristofferson – whom, along with Ebert, Prine credited as his discoverer – held that Prine wrote songs that were so good that “we’ll have to break his thumbs”.

Upon his death, The Tennessean described Prine as “the Mark Twain of modern songwriting.”  Rolling Stone called Prine “one of America’s greatest songwriters” who “combined literary genius with a common touch.”  The New York Times said he “chronicled the human condition” with a “raspy voice and a gift for offbeat humor.”  Prine was eulogized ed by The Washington Post as “the bard of broken hearts and dirty windows.”   Rob Harvilla, former editor for Village Voice, Spin Magazine, and Deadspin, wrote in The Ringer that Prine was a “country-folk genius and American hero.”  Prine founded one record label, wrote two number 1 hit songs (Billboard Country Hot 100) – “Love Is On A Roll” by Don Williams and “I Just Wanna Dance With You” by George Strait – and released 46 albums.  Even before his death on April 7, 2020, at age 73 from complications of COVID-19, John Prine had earned his place among the American literary greats, far surpassing anything one might expect from a job title so humble as “singer-songwriter”.

The assessments of peers and press capture Prine’s cultural and artistic impact well, but his songs tell his story best.  “Perfectly Prine” – May 20 at The Harris Arts Center, 212 South Wall Street in Calhoun – will feature live performances of Prine’s songs and reflections on the man and his legacy from Jule Medders, Faye and Ron Bentley, David Bell, Charlsey Etheridge-Minor, Russell Cook, Cheyenne Medders, Jackson Lawrence, Jeri Dunn, and Joseph Blake Evans.  “Perfectly Prine” is a production of the Music Guild, a division of The Harris Arts Center.  Doors open at 7 p.m. and the show at 8 p.m.  Tickets are $15 for general admission. For more information or to purchase tickets, visit harrisartscenter.com or call (706) 629-2599.