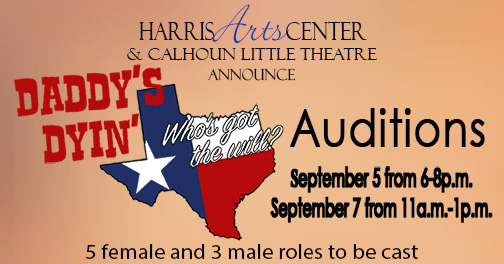 Three males and five females, ages 17 to 60+, will be cast. No special preparation is necessary; actors will read cold from the script.

Production dates for Daddy’s Dyin’ Who’s Got the Will are set for October 24-27, 2019. Daddy’s Dyin’ is a comedy set just outside of Lowake, Texas. Family has gathered to await the impending death of their patriarch after his recent stroke. “It is not the story of the impending demise of the father or of the drafting of his will, but of a rebirth of the spirit of the family unit.” This Little Theatre production will be directed by Jeff Adair.

Roles to be Cast:
SARA LEE TURNOVER, 36, the middle sister. Twenty pounds overweight, the town beautician, sports a bleached beehive. Single and still lives at home. Strong-willed and has a wonderful sense of humor.

EVALITA TURNOVER, 35, the youngest sister. Six-times married, loves to shock her family. She was a beauty-and still is from a distance. Has a worn look about her. A wounded soul.

HARMONY RHODES, 36, Evalita’s latest fiancé. A musician and vegetarian. Attractive, tan, off-beat, long curly hair. Looks like Jesus with earrings. Has a past.

BUFORD “DADDY” TURNOVER, 67, the father. A stroke victim. Partially paralyzed on his left side, but can walk with a slight limp. Has occasional moments of coherency.